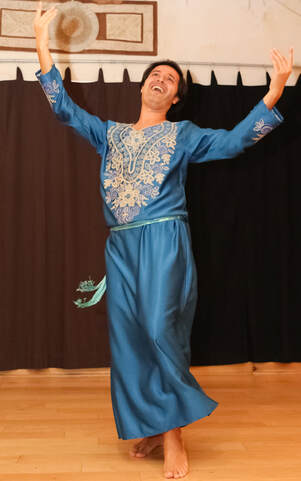 Torkom Movsesiyan is a multi-award winning dance artist, an executive producer, a cultural ambassador of the arts, and the founder of Torkomada, Inc. Torkom envisions Middle Eastern dance as an important but neglected diplomatic tool in cultural diplomacy versus more conventional methods that have failed. His latest dance project, Raqs Revolution, was awarded the Upper Manhattan Empowerment Zone Grant to counteract recent rising anti-immigrant sentiments in the U.S., and give “a bit of home” to Middle Eastern immigrants. His annual award winning Middle Eastern Dance Festival, Raqs Without Borders, is an original contribution to the world of art and diplomacy, awarded a grant by the National Endowment for the Arts in 2020, five grants (2016-2021) by Lower Manhattan Cultural Council, in part by funds from the NYC Department of Cultural Affairs and NYS Council on the Arts. In 2020, Torkom was awarded the Dancers Above Water Relief Fund, The CATCH Folk Arts Relief Fund, The United States Artists Relief Fund, and The NYC Dancers Relief Fund. In 2018, Brooklyn Arts Council awarded his dance project, "Arabic Nights in Brooklyn," the Brooklyn Arts Fund grant. In 2015, Torkom appeared as the guest dancer in the Off-Broadway show, "Blood on the Veil." The CUNY Dance Initiative awarded him a residency to create lecture-demos about Raqs Sharqi, an Egyptian dance style at the LaGuardia Performing Arts Center. Torkom Movsesiyan has lectured, taught and performed Middle Eastern dance at UNESCO's International Dance Council, CUNY, the University of Minnesota, Kean University, and IDance Studio. Similarly, Mr. Movsesiyan has published many scholarly articles and book essays on the trajectory of dance in cultural diplomacy. Torkom Movsesiyan was listed as one of the world's most renown Armenian dancers in Artsvi Bakhchinyan's book, "The Armenians in World Choreography." The New York Foundation for the Arts named him "a Renaissance artist with extraordinary abilities," engaging in the different disciplines of art as a dance instructor, folklorist, actor, scholar, polyglot, and a college professor. His work fosters mutual understanding between the West and the Middle East, and has been featured in the Jon Stewart Show, HBO, Everyday with Rachael Ray, the Discovery Channel, UNESCO, Lincoln Center, TimeOut NY, Pregnant with Heels, and the Daily News. Torkom holds a Master's degree in international relations, and an honors Bachelor's degree in international studies from the City College of New York. Torkom has studied Raqs Sharqi extensively with Morocco, Tarik Sultan, Raqia Hassan, and Tito. He currently teaches Raqs Sharqi dance, Arabic language classes, and workshops online. 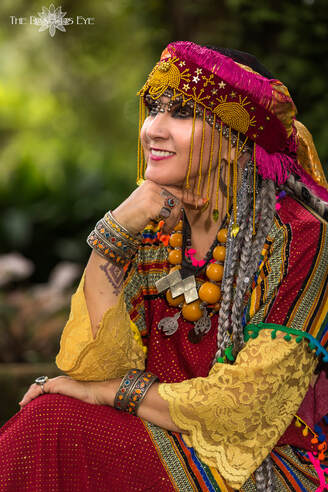 The legendary Amel Tafsout, meaning ‘Hopes of Spring’, is an inspirational first source master dance artist, choreographer, instructor, frame drummer, singer, energy worker and one of the finest exponents of North African traditional and contemporary Maghreb Dance of our time. With research in dance anthropology, and long training in various healing practices, Tafsout’s knowledge of her culture and her experience in many dance styles and music make her very unique. Raised in Algeria among the finest traditional dancers and musicians, Tafsout was fascinated by dance and music since childhood. In her early twenties, Tafsout moved to Germany where she founded the Pan Arabic dance company ‘Banat As Sahra’. In the late 80s, she moved to London, U.K. where she taught and performed at various dance and music festivals and founded ‘The Tafsoutettes’ Dance Company. While currently living in the U.S.A. she is still performing and teaching worldwide. Tafsout is like a voyager between countries, culture, and languages. Having worked and lived all over the world, unsurprisingly, migration has been a constant theme in her work. Fluent in 5 languages, she is always aware of the impact that cultures have in art and how that can be expressed in dance. Amel has lectured, danced, taught, sung and conducted anthropological research in many countries. She has been featured in various TV programs in Europe and North Africa. She also published many articles related to dance and Maghreb women in academic and popular magazines. Her research focuses on the Ritual in Maghreb dances as well as looking at dance as a healing form. She explores the rich tapestry of movement and rhythm that has woven over time between Spain and the Maghreb, Africa and the Middle East, the Mediterranean Sea and Europe. Tafsout developed, reconstructed and stylized the Maghreb dances through her dance experience, her research, her teaching, and performances. She had mesmerized audiences around the world with the earthy fluidity of her dance, her stunning stage presence, and great spirituality. In 2018, Inanna Iraqi Dance Festival in Estonia gave Amel an award of acknowledgment and appreciation for her longstanding contributions in Arabic dance and its heritage.
Website: www.ameltafsout.com 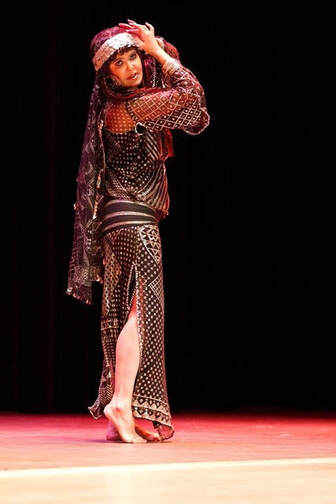 Through the refinement of her performances and the creativity of her choreographies, Leila Haddad has caused oriental dance to be recognized as a major art form, far removed from clichés. Leila Haddad is a Tunisian-born pioneer, based in France. She has revolutionized oriental dance in the same way as Loïe Fuller, Ruth Saint-Denis and Martha Graham did for other forms of dance; especially, Isadora Duncan who freed the body and movement. Thus, announcing the freedom of modern dance to come, as also did "La Argentina," who led the way in bringing flamenco to theatre stages. She has been the incarnation of femininity on theatre stages all over the world, where people either knew nothing about or spoke disparagingly of this art commonly referred to as "belly dance." She has achieved recognition of the term "oriental dance," which in Arabic is "raqs el sharqi." She has succeeded in bringing this dance out of the Arab-Berber villages where it remained hidden, and she has taken it away from the cabarets where it was losing its soul. Leila writes choreographic pieces that she performs solo: these performances are programmed by theatres on 5 continents. She meets with her audience to discuss her dancing, and the history of oriental dance. She is invited to give lectures and to participate in symposiums – at the Sorbonne, the Arab World Institute, the Senate – on themes linked to women, to the dancing body, to women in the Arab-Berber world, and modernity vs. tradition. She contributed to the symposium "Women's Voices," organized by the theatre Haus der Kulturen der Welt in Berlin. Leila’s performances are not ethnographic, rather, she draws inspiration from the original and ancient dances, creating links between the past and the present, between oriental dance and contemporary dance. She has a global and pioneering approach to oriental dance.
Website: www.leilahaddad.com 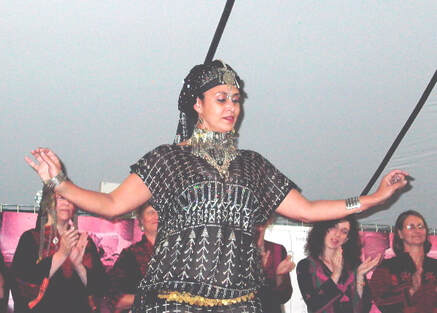 Born and raised in Cairo, Egypt, Nashwa Cahill attended Cairo University and obtained a Bachelor of Arts in Literature. Her lifelong love of dance led her to study dance with Mahmoud Reda, internationally renowned ‘ambassador of dance’ in Cairo. She studied folkloric dance forms from the Gulf, Sinai, Alexandria and Red Sea regions, providing her with a solid foundation before beginning her performing and teaching career. She studied the ‘Oriental style’ of dance with masters of the arts including Ibrahim Aakef, utilizing traditional and contemporary props, learning solo, duet and trio dance structures and mastering performance style, choreography, and staging. In 1988, Nashwa moved to Tokyo, Japan, where she continued to teach this art form to a growing following. In 1993, she resided in Osaka and continued to perform, teach and founded the Isis Dance group. Some of her dancers are continuing to dance professionally until now. Nashwa’s central vision was to show through education that “Belly dance” (a misnomer that she seeks to correct) is an art form that everyone can enjoy, regardless of age or physical condition. In 1999, Nashwa relocated to California, where she continued performing and teaching Middle Eastern dance. She performed solo concerts and also opened shows for stars popular in the Arab World. She opened for Egyptian super-star Hakim during his U.S. Tour and Lebanese legend Sabah. Based in Santa Barbara, she performed in San Francisco and Los Angeles to a large Arab and international audiences, and led workshops around the USA and abroad. She taught at the historical Lobero Theater and for Santa Barbara City College. She collaborated with Dr. Scott Marcus, Professor of Ethnomusicology at UC Santa Barbara, and members of his UCSB Middle East Ensemble. In 2005, Nashwa moved to Berea, Kentucky. Shortly thereafter, she obtained her Master Degree in the Health Sciences. Nashwa is a Dance Professor at Berea College and founded Berea Middle Eastern Dance Ensemble. She teaches movement courses and academic courses. In addition to teaching, she choreographs for various concerts and Dance Theater. Nashwa is in great demand as a speaker on the history and tradition of Middle Eastern dance, including its social, spiritual and cultural significance. She continues to provide inspiration and insight into this art form. “Al-Raqs al-Sharqi (Middle Eastern Dance) is an incredible synthesis of motion and rhythm, culture and history, fitness and healing, tradition and spirituality- issues that are of concern to so many of us today.” – Nashwa Cahill 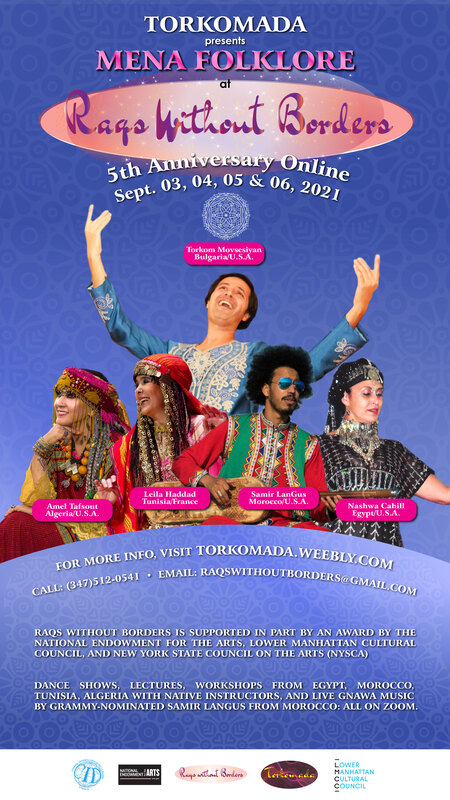